The story of the birth of the Alza mascot

The noisy alien who made his mark in advertising history.

The story of Alza the alien began in the spring of 2005, when the CEO of a marginally known company, Alzasoft—after long negotiations—finally asked us to create advertising for them. The company, which served IT enthusiasts, came forward with a simple assignment: “It must be funny. Something like what Oskar has.” (Note: Oskar—a former mobile network operator).

In 2005 it was not common for an “ordinary” consumer to buy a PC. Most people would usually ask the opinions of some IT professionals they knew. These professionals—“geeks” who lived somewhat “alienated” among CPUs, hard drives, motherboards and RAM—became our target group.

There ensued dozens of hours of interviews with Alzasoft’s customers, their competitions’ customers, and new potential customers, hundreds of questionnaires, hours upon hours of analyses, brainstorming sessions, and presentations of concepts of the company’s benefits. And all that finally brought us to Alzasoft’s new marketing strategy.

That’s when Honza and Milan created the noisy alien Alza.

How we did it

Alza the alien was born in mid-2005 and his first cry was aired by Radio DEEJAY (formerly BONTON). From his very first day he has been voiced by our friend Bohdan Tůma, whom we chose not only for his unbelievably broad vocal range, but also for him being the Czech voice of Cartman from South Park. This particular character from the cult TV series and his voice resonated so much with our target group that it became a great inspiration for the making of Alza. Listeners were thus easily attracted by Bohdan’s slightly computer-modulated voice.

In the spring of 2007, Alza introduced himself as a mascot in his full form. We reworked his first sketch from back in 2005 and then proudly put him on billboards all over Prague with a teaser campaign which the little green fellow launched with a simple “Hello!”. In mid-2007, Alza made his first appearance on TV when he “smashed” your TV screens. Since that time we have created dozens of other very successful spots. V polovině roku 2007 se Alza poprvé objevil na obrazovkách televizí, kde „zuřivě rozbíjel“ Vaše obrazovky. Od té doby jsme vytvořili desítky dalších velmi úspěšných spotů.

Neither did we neglect print media. In the tabloid Blesk we made “smart” remarks about sales.

The campaigns 1,000 Action Sale Prices and A Hundred Tablets Every Week have made their profound mark in the history of advertising. We bet that many of you haven’t been able to get them out of your heads to this day.

We have kept the recipe simple: An easy rhyme, the product in the leading role, and above all… Alza the alien.

And as if this were not enough, we dared challenge the company’s name and sparked its change from Alzasoft to Alza.cz. We also designed and implemented tens of modifications to the Alza.cz homepage, we conducted many surveys and organised mystery shopping. In other words, we did our best to help Alza.cz become the reality behind the claim that we made about it—the biggest computer and electronics store in the country.

Whether we succeeded can be best judged by the letter that the owner of the company wrote us after three years of partnership: “Our cooperation has made its mark in the history of our company and on the IT market as a whole. Yet the most heartening is the fact that our partnership has yielded profits.”—Aleš Zavoral

Finally, we must point out the bravery of Aleš Zavoral and Andrea Bartošová–without whom there would never be any Alza the alien. Aleš and Andrea were like the planet Earth, defining physical laws. What is or is not possible. This gave us the chance to become proud parents to our little “rascal”. And in their foresight, they let us play with our brainchild for years. Big thanks go out to Vašek Drábek, Kamil Polanský, and a host of other collaborators: Without you, Alza would never have become the guy he is.. 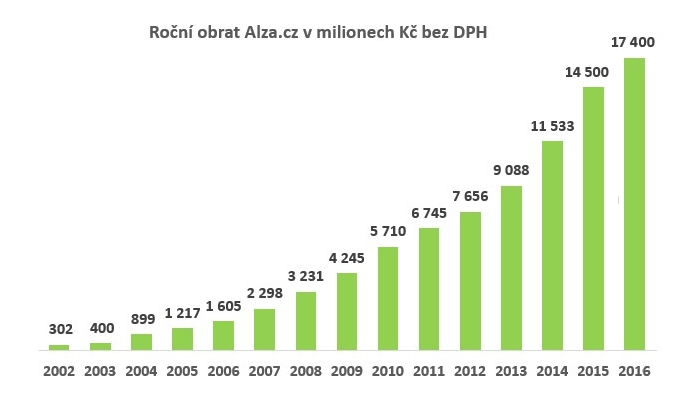 Back to overview
Next reference